The 2019/20 fires were exceptional in size and impact. The Department of Environment, Land, Water and Planning is continuing to coordinate and deliver actions to support and protect Victoria’s plants and animals following the fires. Key achievements from the 261 program activities and examples of how our actions are protecting threatened and important species.

Click on the drop-down menu below to find more information on recent program highlights.

The 2019/20 Victorian bushfires burnt approximately 1,500,000 hectares across Victoria. The bushfires have impacted threatened species and their unique habitats, including approximately 78% of the remaining Warm Temperate Rainforest in Victoria.

The report assessed the impact of the Victorian bushfires on over 4400 species. It found that 244 species of plants and animals had at least 50% of their likely statewide habitat burnt, 215 of which are rare or threatened species.

This Story Map contains examples of a range of actions underway across the sector to support response and recovery.

Guided by the impact assessment described in the report, DELWP has worked alongside species experts, academics, and land managers to prioritise actions for fire-affected threatened species and habitats. This forms an overarching, multi-year program of initiatives across four phases:

This Bushfire Biodiversity Response and Recovery program includes actions funded by the Victorian Government, Australian Government and other sources including public donations. DELWP is working closely with partner agencies, Traditional Owners, and non-government organisations to coordinate and support all actions to help the protection and recovery of Victoria’s flora, fauna and habitats impacted by the 2019/20 fires.

The Victorian Government is providing $54.5 million for the Bushfire Biodiversity Response and Recovery program to support Victoria’s bushfire impacted wildlife and biodiversity. This is supported by $15 million from the Commonwealth Government’s Bushfire Recovery package for wildlife and their habitat. The Victorian government has also contributed $7.7 million to re-seed Alpine and Mountain Ash Forests as part of the broader bushfire recovery program.

The Bushfire Biodiversity Response and Recovery program delivers actions across a range of themes and focus areas.

Many actions are underway as we continue to assess fire-affected areas and respond directly to impacted plants and animals.

Assessing the specific impacts of the fires on species or locations of concern enables more targeted actions. This theme assesses the status of key plants, animals and ecosystems following the fires to inform management actions. The focus is on species or ecosystems that have had all known populations/locations affected or where the level of impact is not fully known.

The effects of the fires can impact the ability of some threatened species to persist in their natural environment. This theme prioritises options for the emergency extraction of these species at risk of extinction or further decline. The aim is to collect critically threatened fauna species and keep them in temporary care or at an alternative wild location, as well as collecting threatened flora seeds and cuttings for propagation, until the species can be returned to the wild. Responding to the welfare of wildlife injured during fire is a critical element of the Victorian Government’s fire response procedures. There is also significant community concern for wildlife during fire events. This theme builds on existing arrangements and seeks to closer engage with community on wildlife response during fires. This includes identifying improved coordination and communication with wildlife carers and advocacy groups. 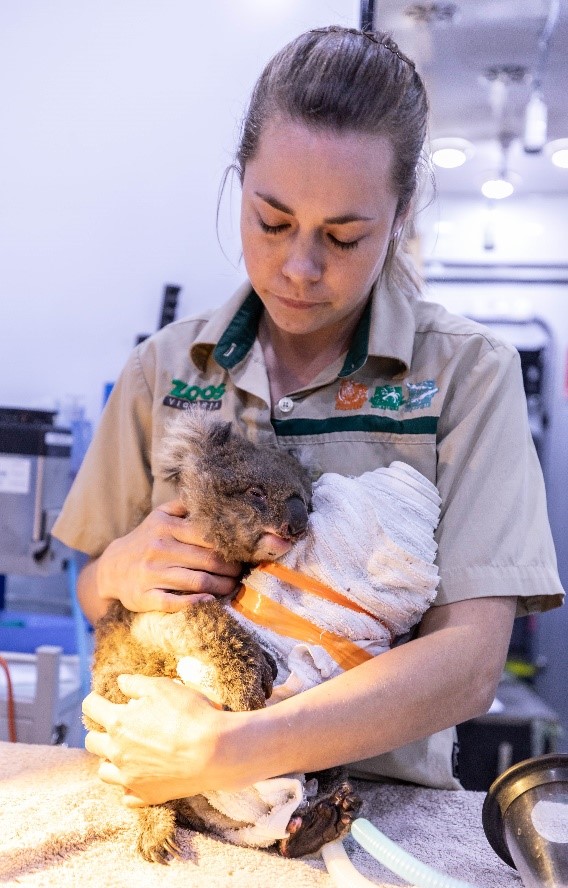 Wildlife and habitats affected by fires are more vulnerable to introduced pest plants and animals. Some pests can thrive in a post-fire landscape, increasing their impact on an environment that is already compromised. This theme delivers an integrated and coordinated program focused on introduced herbivore and predator control, and weed control, to reduce the heightened risks in burnt and adjacent areas. For more information on the threat management program, visit the Managing invasive species after fire webpage

This theme will Heal Country through reading Country. It will enable Traditional Owners to apply ecological knowledge and lead the coordination of cultural heritage and related activities in the fire-affected areas.

The recovery of species affected by the fires will benefit from actions both within and beyond the 2019-20 fire area. This theme focuses on maximising the long-term statewide resilience of species and their habitats across the landscape, with emphasis on species of greatest concern after the fires.

This theme will improve our knowledge of expected biodiversity outcomes from post-fire management of threats and will improve preparedness for protecting biodiversity during future fire events. This includes identifying priority options across Victorian landscapes to reduce the risks to biodiversity in the event of future fires.

Connecting with nature has benefits for people and for biodiversity. The aim of this theme is to enable social, economic, and environmental recovery of fire-impacted communities, led by nature. It will support people's recovery from the fires by facilitating their engagement in activities to assist the recovery of nature.

Fire-impacted communities will be supported to learn about how nature is responding, and to design and deliver projects that benefit local plants, wildlife and habitats. Participating in these projects, witnessing natural recovery, and gaining a sense of hope and agency, can actively support recovery of fire affected communities.

This covers coordination and support across partners, as well as communications, engagement and program administration across all themes.

This evaluation assessed the design, delivery and impact of the Bushfire Biodiversity Response and Recovery Program activities delivered under the three initial funding packages that concluded on 30 June 2021:

The evaluation report draws on both quantitative and qualitative data to demonstrate the impacts of these three packages of work and inform future programs. The findings and conclusions are outlined below. 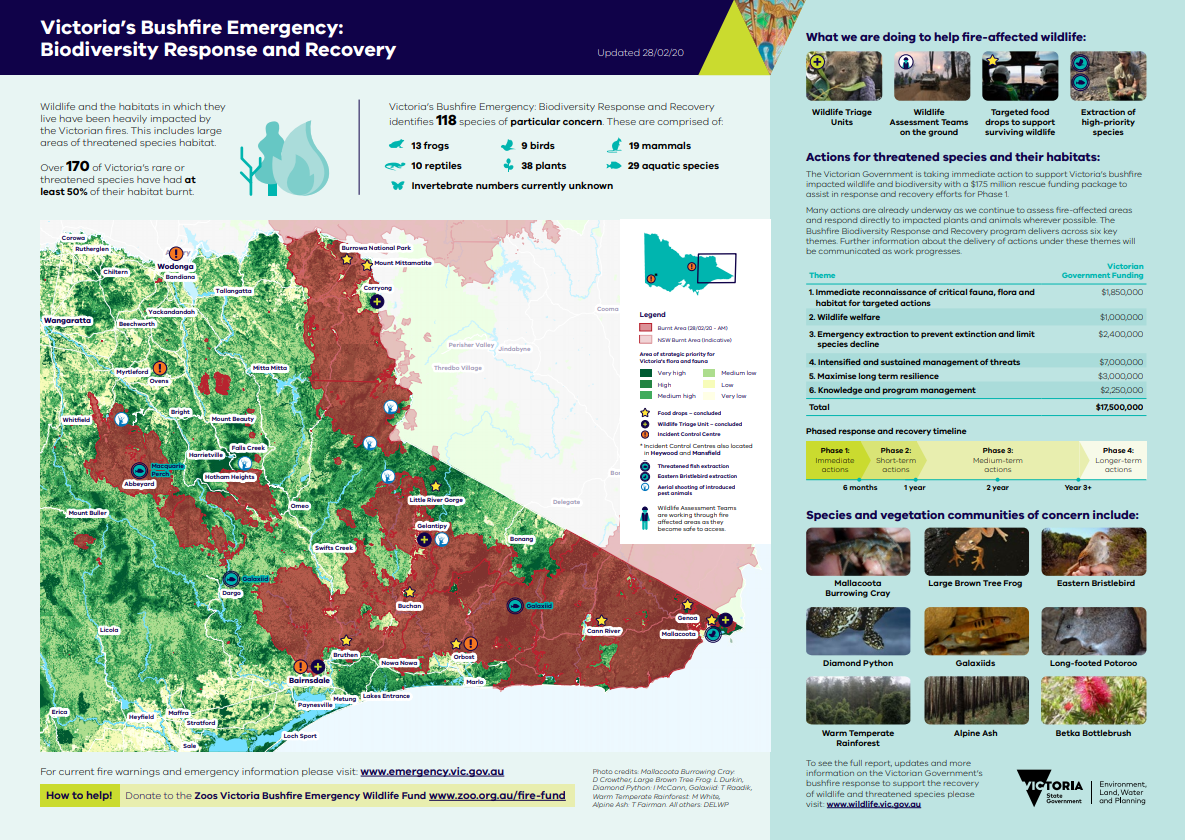 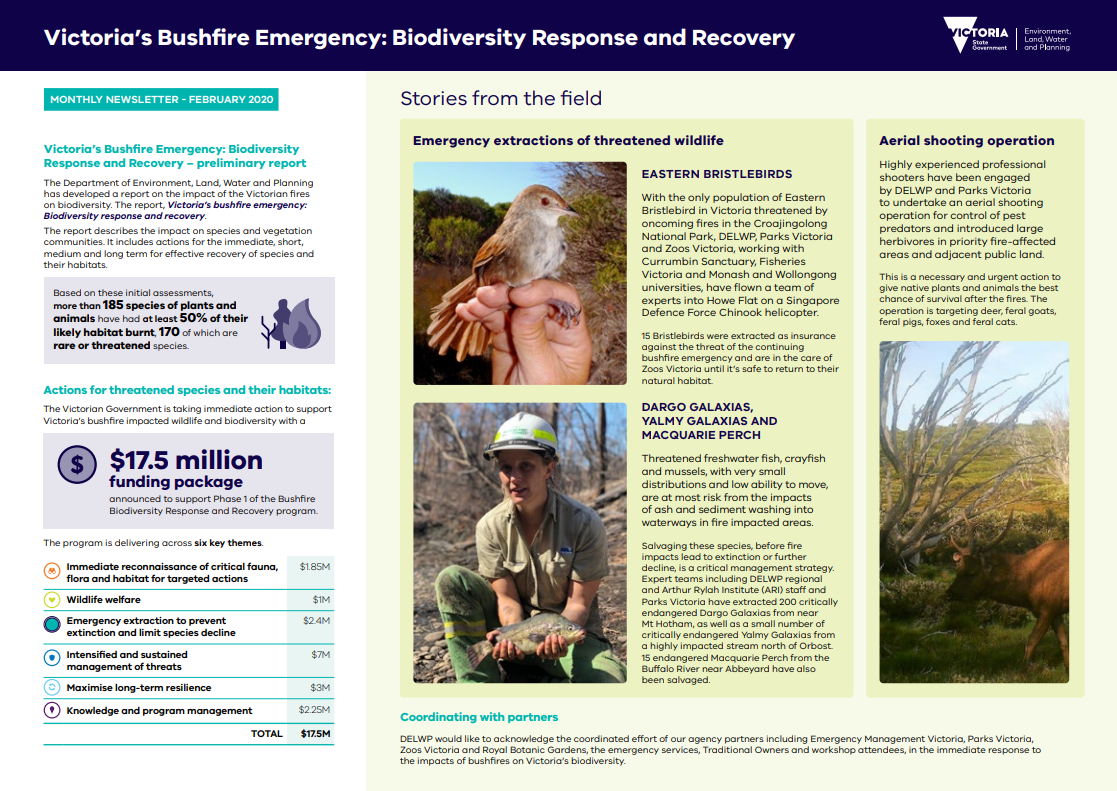 How you can help

Learn more about how you can act for nature after fires and ensure Victoria’s biodiversity is healthy, valued and actively cared for in line with Protecting Victoria’s Environment – Biodiversity 2037.

Donate to the Zoos Victoria Bushfire Emergency Wildlife Fund. 100% of funds raised will be used to support the recovery of bushfire affected wildlife and their habitats.