Kangaroos are a protected native species, but they can sometimes require management for the health and welfare of kangaroo populations and the protection of people, property and biodiversity.

Kangaroos are some of Australia's most recognisable and well known native animals. They form an integral part of our natural ecosystems, playing an important role in promoting the regeneration of native plants.

Across Victoria, there are three species of kangaroo: Red, Eastern Grey and Western Grey.

The Department of Environment, Land, Water and Planning (DELWP) oversees the management and protection of kangaroos across Victoria.

Aerial surveys were used to estimate the kangaroo population in 58 Victorian Local Government Areas (LGA). These estimates exclude LGAs located entirely (or almost entirely) within highly urbanised parts of the Melbourne metropolitan area. The surveys also excluded thickly forested parts of Victoria as it is too difficult to see kangaroos from the air in these areas.

Due to the difficulty in distinguishing between Eastern and Western Grey Kangaroos during aerial surveys, ground surveys were conducted in the west of the state to estimate the relative proportions of each species in areas where their ranges overlap. The numbers of the two species were then calculated by applying the relative proportion to the aerial survey data to provide separate estimates for both Eastern and Western Grey Kangaroos.

The overall kangaroo population in Victoria at the time of the 2020 survey was estimated to be 1,942,000.

The 2020 survey results build on those from the 2017 and 2018 surveys and help our understanding of the kangaroo population size and species distribution across Victoria. The design of the survey was similar to the 2018 survey with some slight revisions to aerial transects that could not be flown safely in 2018. These were replaced in 2020 to increase the survey effort and improve the precision of the results.

The full report of the 2020 kangaroo population survey results is available below, along with a summary fact sheet.

A further survey is planned for 2022. 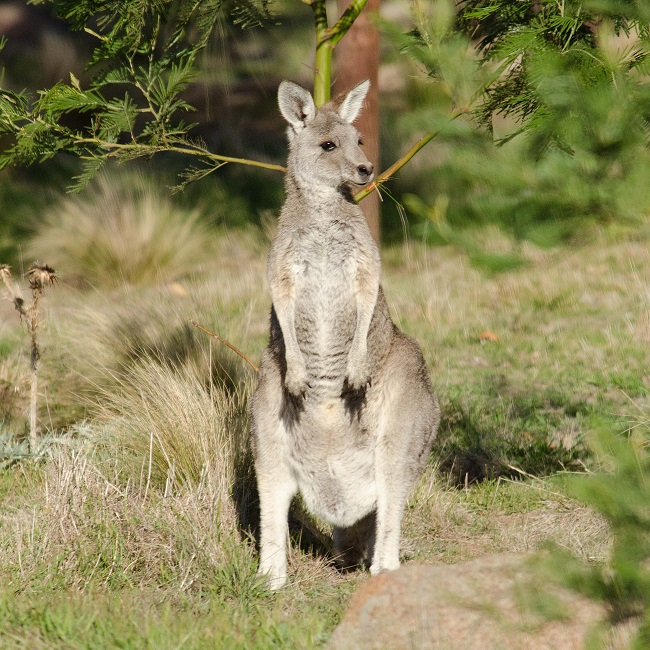 The 2017 kangaroo population survey reports and the full survey design is available on the DELWP Arthur Rylah Institute webpage.

Kangaroos can develop chronic phalaris toxicity, or ‘staggers’ as it is commonly referred to in sheep, which causes neurological damage in animals that have eaten Phalaris grasses (also known as canary grass). Phalaris is a common pasture crop and when grown under certain conditions, the young growth of some phalaris grass species can be toxic to animals that graze on it.

Symptoms commonly seen in kangaroos that have chronic phalaris toxicity poisoning include muscle tremors and abnormal or erratic movement, such as repeated falling over, giving the appearance that the kangaroo is “drunk” or “staggering”. Phalaris toxicity cannot be confirmed through the presence of symptoms alone and requires post-mortem examination of the brain and exclusion of other causes to successfully diagnose the condition.

Currently there is no known treatment for this condition in wildlife and unfortunately animals severely affected often require euthanasia or humane killing for animal welfare reasons (for example, if the kangaroo is unable to move and graze or escape predators).

Phalaris grasses that have a high-risk of being toxic can be sprayed in stages and replaced with non-toxic varieties. However, this process would increase grazing pressure by removing a food source and the use of chemical spray may create its own risks of toxicity.

If you suspect a kangaroo with chronic phalaris toxicity poisoning, please contact your local vet or a wildlife rescue organisation. You can also report it to the DELWP Customer Contact Centre on 136 186.

Kangaroos, like all native wildlife, are protected in Victoria under the Wildlife Act 1975. While kangaroos are a protected species in Victoria, there are situations where kangaroos can cause damage which can negatively affect Victorian farmers, regional communities and biodiversity.

Areas with large kangaroo populations can experience issues such as:

The Office of Conservation Regulator, DELWP, issues Authorities to Control Wildlife (ATCWs) under section 28A of the Wildlife Act 1975 for the control of kangaroos where they are demonstrated to be damaging pasture, crops or other property or impacting on biodiversity values. Any person wishing to control wildlife, including kangaroos, on their property is required to apply for an ATCW.

The management techniques for kangaroo populations include fertility control, fencing, scaring and culling.

These techniques vary in effectiveness depending on the situation and size of the population being managed. Wherever possible, DELWP advocates for the non-lethal management of kangaroos. Where non-lethal techniques are ineffective or impractical, lethal control may be necessary.

The Office of the Conservation Regulator provides further advice on kangaroo management techniques, including how to apply for an ATCW.

In Victoria, harvesting of Eastern and Western Grey kangaroos has been allowed since 1 October 2019, under the Victorian Kangaroo Harvest Management Plan (KHMP).

Under the Kangaroo Harvesting Program (KHP), landholders can use authorised harvesters to control kangaroos on their property at no charge. Unlike the Authority to Control Wildlife (ATCW) system, where landholders control and dispose of the kangaroos themselves, the KHP allows landholders to engage professional harvesters who will undertake the control and will remove the carcasses for commercial use. The number of kangaroos harvested through this program is strictly controlled.

The Kangaroo Harvesting Program is administered by the Department of Jobs, Precincts and Regions (DJPR), while DELWP is responsible for preparing the KHMP and annual quota for the program.

For more information about the KHP and to find an authorised harvester operating in your area please visit  DJPR’s Kangaroo Harvesting Program page.