The long trek to protect the Eastern Bristlebird

The eastern bristlebird (dasyornis brachypterus)is a small and cryptic bird, named after its distinctive bristles, with a habitat preference for dense coastal vegetation. Until recently, the only Victorian population of eastern bristlebirds, consisting of approximately 140 to 180 individuals, was found in the far eastern corner of Victoria, at Cape Howe.

When the 2019 to 2020 fires in Victoria were predicted to impact the area, the eastern bristlebird was feared to be at substantial risk of local extinction. Establishing a second robust and healthy population in Victoria has remained a high priority the time since, to build the natural resilience of eastern bristlebirds in their defence against climate change, habitat loss and predation.

Over the course of a particularly wet week in April 2022, a task force of 40 people representing 3 Australian states, including the Federal, Victorian and New South Wales Governments, partnered with 10 other agencies, combining their technical expertise to undertake the first wild-to-wild interstate translocation of the eastern bristlebird.

How the translocation unfolded

After meticulous planning, the translocation began with capture teams in the Bherwerre Peninsula at Jervis Bay and Booderee National Park, who enticed the birds into a mist-net using call playback techniques, where the birds were then moved to a processing team. The processing team carried out comprehensive and delicate individual health assessments on each bird, determining its suitability for the 10-hour journey. This suitability was determined by the bird’s weight and overall health condition.

The suitable individuals selected, 17 in total, were then banded, fitted with a temporary radio tracking transmitter, documented and each placed in their very own customised transport boxes, lined with poa tussock grass (a preferred native grass supplied by the Royal Botanic Gardens Victoria) and an abundance of mealworms and crickets for the birds to eat during the 10-hour journey.

Image: The cross-jurisdictional team, led by DELWP, celebrate the success of a delicate translocation process at Wilsons Promontory National Park.

Animal welfare was the number one priority throughout the translocation, influencing every detail of logistics. The trip took place between dusk and dawn, in order to maintain the bird’s circadian rhythm, with teams of drivers maintaining complete silence in the vehicle for the entire trip. In order to minimise light exposure, windows were blacked-out and each and every box was placed on top of foam cushioning to buffer any bumps along the road for the very important passengers.

On arrival at Wilsons Promontory at first light, the release team transported the birds via four-wheel-drive tracks to the designated release site, where a wildlife veterinarian and zoo keeper conducted a visual inspection before they were released into their new habitat. 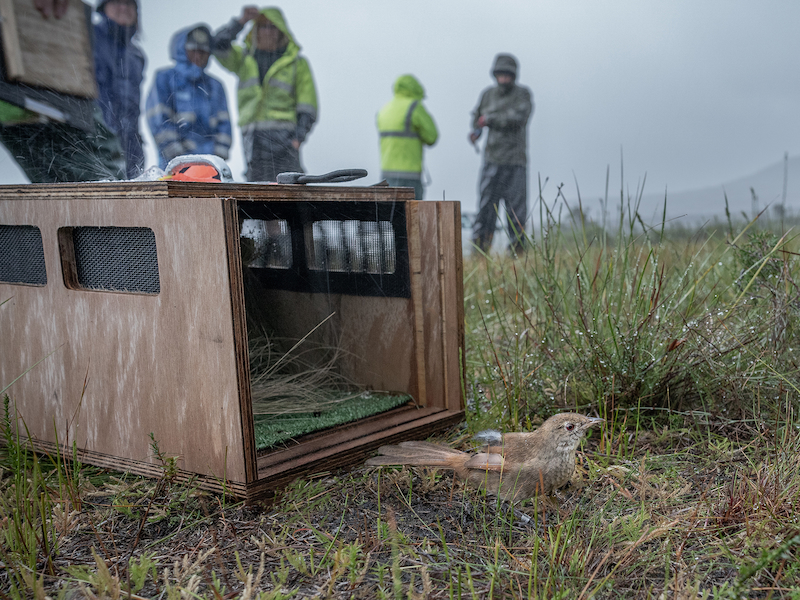 Image: One of the first 17 eastern bristlebirds released into Wilsons Promontory National Park

The radio tracking team continues to monitor the 17 birds closely, ensuring that Victoria’s second population of eastern bristlebirds continue to find adequate food and shelter in their new home. Triangulation, radio transmitters and automated song recorders allow the team to check in regularly.

Bird survival, breeding success, increased genetic diversity and evidence the birds are utilising the habitat at Wilson’s Promontory will determine the overall success of the translocation in the months to come.

A special thanks to our partners who helped bring this translocation to life: