DELWP is the Lead Agency to respond to wildlife welfare caused by declared emergencies in Victoria.

Wildlife have been affected by the floods that are currently impacting many areas of Victoria. An updated factsheet regarding safety and wildlife welfare has been prepared.

Up to date flood information and warnings can be found at VicEmergency.

Information on reporting injured wildlife as a result of flooding can be found here.

Under Victorian emergency management arrangements, the Department of Energy Environment and Climate Action (DEECA) is the lead agency for wildlife welfare arising from declared emergencies. This covers a range of emergency events including fire, flood and storms.  Response triggers and actions vary on the type of emergency event and sometimes the location or the specific nature of the event itself.

During floods, DEECA monitors wildlife impacts through the State and Regional emergency management teams and ensures that wildlife welfare is appropriately managed where save to do so and that wildlife and biodiversity are included in relief and recovery plans.

Wildlife response during flood events are rare and will only be undertaken to address significant and immediate wildlife welfare impacts, where it is safe to do so.  These interventions will be focused on addressing the immediate suffering of individual or groups of animals.  Where wildlife are trapped on higher ground, their condition will be monitored.  If the welfare of these animals is significantly compromised (starving, emaciation, drowning) then an intervention will be considered.  It is essential that any intervention will not cause further stress and suffering.

With floods, emergency response activities are targeted based on individual situations aimed at managing wildlife welfare.  At all times human safety is the highest priority and no activity that may pose a risk to emergency services or members of the public will be undertaken.

How do floods impact wildlife?

High rainfall events and floods occur infrequently in Victoria.  The impact on the landscape is determined by a range of factors including the topography of the land, vegetation cover, pre-existing soil moisture and the duration and intensity of the rainfall event.
Wildlife can respond to flooding by moving out of the way of rising waters to higher ground, where they are able to do so.  Wildlife impacted by flooding are likely to be fatigued and stressed and are best left alone to recover if they are uninjured.

Sometimes wildlife can be caught in trees or temporary islands as a result of flooding.  These animals will be able to survive for a number of days until flood waters recede and they are able to move away.  Approaching these animals in an attempt to relocate them has a high likelihood of resulting in further stress in the animal and place responders at risk.

Feeding of wildlife is generally not recommended as it can cause a range of issues for the existing and recovering environment, wildlife and community members, including:

For these reasons, members of the public should not undertake the supplementary feeding of wildlife.

The need for targeted feeding for specific species will be based on intelligence from the impacted area, consultation with wildlife specialists and scientific advice. The appropriate food required for supplementation, method of delivery and duration of the program will be monitored to measure its effectiveness.

Reporting of injured wildlife during floods

The Wildlife Emergency app provides a straightforward way to report wildlife injured during emergency events in Victoria to DEECA. The app allows members of the public to submit reports providing basic information on location, suspected injury, species and the addition of photographs (if appropriate). If your device is not connected to the internet, you can still create a report and will be prompted to submit it when your device has an internet connection.

Please take care when you are near injured or distressed animals. Approaching them or improper capture and handling techniques can cause further distress or injury to both yourself and wildlife.

Individual wildlife away from flood waters that are injured can be reported to an authorised local wildlife carer, rescue group or Wildlife Victoria.
Individuals and wildlife carers and rescuers should not enter or go near flood waters to attempt to assist wildlife.  This is extremely dangerous and may lead to the loss of life. 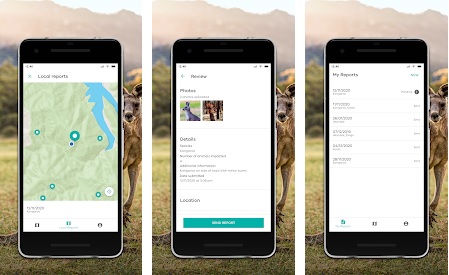